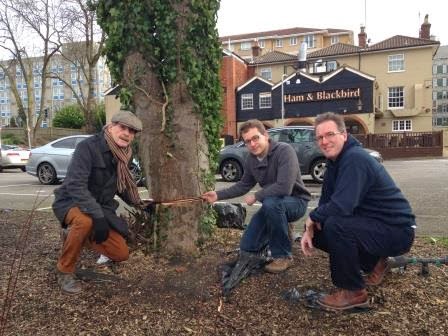 The Ham and Blackbird public house has come under intense criticism from Empress Ward councillors Gareth Lyon, David Clifford and Brian Parker and local residents for putting passing motorists and pedestrians at risk.

A number of large trees on the site of the Ham and Blackbird pub have been ringmarked with a clear intention of killing them.

In a cynical attempt to bypass the council's planning system the pub is believed to have killed the trees so that they cannot be used as grounds for refusing an application.

The large trees are now highly unstable and are located in one of the busiest roundabouts in Farnborough.

With recent high winds and storms the trees could fall onto the road or the pavement at any moment.

"This is appalling behaviour by the pub - they are cynically trying to get round the planning process and should face serious consequences for this reckless and irresponsible behaviour."

"It is shocking to see such terrible behaviour right in the centre of Farnborough. The trees will now need to come down but I am sure that local residents will make their disapproval known to the pub in future."

"With more storms on the way these trees could fall onto cars or passing pedestrians at any moment - the pub should feel ashamed of themselves."

Councillors and residents are now calling on council officers to take action against the pub and to protect residents from the threat of the trees.

I doubt 'the pub' are anything to do with this - don't you mean the owners of the land and/or the prospective developers?

Flippant as usual, but an important distinction. They did pop out from behind the bar to do this.

Someone from whoever owns this plot, and presumably wants to put in a planning application soon got a murky "contractor" involved to kill them on the quiet.

Bride Hall did the same at the TDD, suddenly chopping down 200+ year old oaks so there was one less thing left to scupper their plans. Didn't see you up in arms that time, did we?

Haha - obviously it should say they 'did not' pop out from behind the bar...

You will no doubt be elated, we have learnt a lot dealing with the other "pub owners" Bride Hall.

You obviously were not around when Councillors called for a clean up order on the TDD site, before anyone took any interest in the plot, and succeeded in saving the old pub building, getting the applicant to change the original plans completely.

I don't think anybody noticed the 'clean up' to be honest. It was a token effort and did not include vital things like fixing the holes in the roof - it took considerable pressure to get any action on that despite it having been obvious for some time.

You still believe you have been a saviour, priceless. All you have managed to do is force McDonald's to adopt a compromised traffic and parking plan in their scrabble to split the public opinion. Well done!

And lets not be coy. Local people were interested in the TDD plot from the moment it closed, and RBC knew about (and agreed to conceal) the McDonald's interest long before it eventually came out - and that was only because people searched the records.

You aren't fooling anyone with this re-invention. Lyon isn't either.

I am far too modest to claim any credit, but I must say that I was pleasantly surprised that three modest, unassuming (albeit intelligent and good looking) local Councillors convinced the Goliath McDonald's to amend an application.

We are not talking important but lightweight traffic plans - we are talking substantial architectural change. You are probably unaware that full demolition with a modular building was proposed before we objected and saved the TDD.

But hey, that's what I'm loving about this assignment. Quietly making a difference for good work families in the Farnborough.

You just don't understand, do you?

'Talking McDonald's into this' has seen them adopt a strategy that plays to the PR of keeping the appearance, at the price of making the parking and access far, far less efficient. I'd go as far as to say the layout will prove to be a significant problem for traffic and safety in future. The modular building was hideous, but at least they were able to route the parking and drive-thru properly that way.

On top of this, the good deed you think you have done has effectively destroyed the building anyway and actually helped McDonald's get permission by splitting public opinion (many more were unhappy with the original plan) They did not need much convincing to change because keeping the façade was a good way to bypass a lot of the criticism, and they don't really care if the consequences down the line aren't good.

You have been played. Sorry.

BTW Back to the Ham and Blackbird article itself. How come no mention of fact that the 'resident' quoted was actually former Cllr Mike Smith (Con)

Did you see the news this morning concerning someone from RBC sabotaging the wikipedia entry for The Tumbledown Dick?

Also, do not take credit for "convincing the Goliath McDonald's to amend an application". We, the people, take credit for our hard work and campaigning. You can take the credit for letting the building stand there for years and for concealing McDonald's interest in it.

Did you see the news this morning concerning someone from RBC sabotaging the wikipedia entry for The Tumbledown Dick?

Also, do not take credit for "convincing the Goliath McDonald's to amend an application". We, the people, take credit for our hard work and campaigning. You can take the credit for letting the building stand there for years and for concealing McDonald's interest in it.

"Sabotaging the wikipedia entry" - that's a bit strong. I don't think any untruths were posted?

It's just an opportunity to have a dig at the council, I expect you are checking all the other IPs who have modified it as well so you can continue the vigilante quest...

It is all a matter of record and witnessed. But hey ho, I recognise this does not suit your arguments. However, the TTD is yesterdays battle and new challenges in the Borough face us. You look back constantly if you wish, I prefer to look forward. I believe and practice forgiving and moving on.I do so regularly in local politics! As do most local politicians of all parties that I admire.

Today's battle is the Ham & Blackbird. I will be doing all I can to get the best outcome for this area. With or without those that hold grudges and disagreements. The current proposal is bad for Farnborough, and I will be working to improve it in any way I can.

I will not be festering in the past, I will be working for a better future. It is not so much what you have done, but what you are doing that matters. And this application matters and something needs doing.