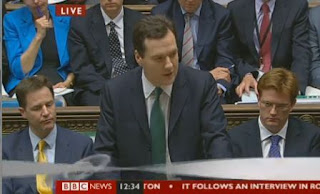 What a historic picture: Tory Chancellor flanked by Liberal Democrats!!
David Cameron also dropped me a line to keep me updated as he always does when there is something important.
Dear David,

I know how worried people are about the state of our economy and the decisions we have to take as a country. So I wanted to write to you personally about the emergency Budget the Chancellor delivered today.
I'm not going to hide it from you - what the coalition has announced is tough. But let's be clear, it's also entirely necessary and entirely unavoidable. Never forget - Labour left us with one of the worst economic inheritances imaginable. They racked up one of the biggest budget deficits in Europe - with the government borrowing one pound for every four it spends - and they doubled the national debt.
Doing nothing about this isn't an option. Greece stands as an example of what happens to countries that don't deal with their debts. And we cannot afford to be timid either - take just small steps now and confidence in our economy will fall, interest rates will rise, we'll carry on with this debt cloud hanging over our whole economic recovery.
That's why these difficult times call for such decisive action. And that's what this emergency Budget is about. Unlike the Budgets of the past thirteen years it's not a random shopping list of policies to buy short-term popularity. It's a thoughtful plan to pay for the bills of the past while planning for our future prosperity. At the heart of George Osborne's Budget are three principles.
First, responsibility. We will bring some sense and sanity back to the public finances by reducing our deficit by an extra £40 billion over the next five years. The majority of this will come from spending cuts - though as we always said, we will protect the NHS and international aid budgets. But tax rises are required too. I know you won't like that. Believe me, I don't like it either. But there's a high price to pay for Labour's incompetence, so VAT will have to rise to 20 percent to deal with their deficit.
Second, freedom. The economic growth needed to create jobs and opportunities for all will only come when we get enterprise flourishing again, so this Budget sends out a signal to the world that Britain is back open for business. In its pages are plans to cut red tape, stop Labour's jobs tax, reduce corporation tax rates, improve our infrastructure, support a low-carbon economy and spread new industries to every corner of our country.
Third, fairness. As I said, this Budget is tough. But it's also fair. That's what I'm about, what this Party is about, it's what this coalition is about. That's why we have asked every part of society to make some sort of contribution to paying off our debts - with the richest paying most. For example, Capital Gains Tax will rise for top rate taxpayers - but I think most people will agree that 28 per cent is a fair rate.
At the same time, we have also done everything we can to protect the least well-off. So while there will be a two-year public sector pay freeze, we will make sure those earning less than £21,000 still get pay increases. We will also increase the personal tax allowance by £1,000 for low and middle income earners, re-link the basic state pension to earnings and make sure it rises each year and reform the benefit and tax credit system so we reward work and protect the most vulnerable. What's more, we have committed an extra £2 billion in child tax credits for the poorest families - helping to ensure there is no increase in measured child poverty over the next two years. This is what we mean when we say we're all in this together.
David, in this emergency Budget I believe you have the measure of this government. Will it provoke debate? Certainly. Will it cost our coalition some popularity? Possibly. But is this the right thing to do - for the health of our economy, for the poorest in our society, for the future of our country? I passionately believe it is.