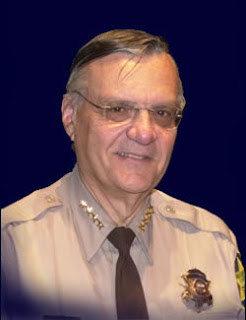 After 42 years of law enforcement experience, Arpaio's strength is in his ability to know what the public wants. "As Sheriff, I serve the public. The public is my boss", are statements often made by Sheriff Arpaio.
And in serving the public, Arpaio has done many unique things as Sheriff.
On August 3, 1993, he started the nation's largest Tent City for convicted inmates. Over 2000 convicted men and women serve their sentences in a canvas incarceration compound. It is a remarkable success story and has garnered the attention of government officials and media worldwide.
The same is true for his chain gangs which work six days a week contributing thousands of dollars of free labor to the community. The male chain gang and the world's first ever female chain gang clean streets, paint over graffiti, and bury the indigent in the county cemetery.
Equally impressive are the Sheriff's get tough policies.

Arpaio doesn't believe in coddling criminals, frequently saying that jails should not be country clubs. He banned smoking, coffee, pornographic magazines, movies and unrestricted television in all jails. He has the cheapest meals in the country too. The average inmate meal costs under 20 cents.
Arpaio also has launched innovative rehabilitation programs like "Hard Knocks High ", the only accredited high school in an American jail. His ALPHA program teaches inmates to turn away from drugs. It is one of his proudest accomplishments. A high percentage of ALPHA graduates leave his jail clean and sober and rarely, if ever, return to incarceration.
As for his deputies, Arpaio has increased salaries, encouraged education by providing incentive pay, improved equipment and the fleet, and has elevated this office to a full-service, state-of-the-art world renowned law enforcement agency.
Also under Arpaio, the posse has grown to 3200 members, the nation's largest volunteer posse. These men and women, always are a great help to deputies, help in search and rescue and other traditional police work as well as in special operations like round-ups of deadbeat parents, fighting prostitution in the valley's so-called red light district, and patrolling malls and shops during holidays. The posse's contribution is invaluable and essentially free to taxpayers.

It is high time life in UK Jails was a lot less uncomfortable - and more of a place they "pay back" their debt to society rather than getting more from the law keeping, tax paying society.