I have just returned from a few weeks exploring in Turkey. Cappadocia is a fascinating region of Turkey for a number of reasons. First it has some unique geology. The landscape is stunning and filled with unusual glacial features that are a geologists dream.

It is also an area that was inhabited by the early Christian Byzantine church - they used the unusual features of the landscape to build churches and homes into the rock. In some areas there are whole cities underground, and built into the mountains. The picture on the right is of a monastic community with many small churches built into the mountain.
The frescos in the churches are beautifully illustrated and colourful, and all very similar in that they depict the life of the Saviour from birth to death. They also often include paintings of the prophets of the Old Testiment, and the writers of the four gospels. Below is a very typical scene of the crucifixion. 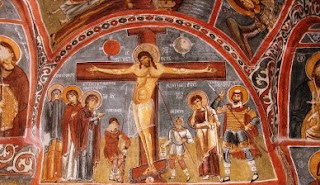 Unknown to many people, there was a very large Turkish Christian Community in this region up until 1924 when all the Turkish Christians were force ably exchanged in a deal with Greece for Greek Muslims. However, there remain Christians and Jews in the very cosmopolitan city of Istanbul. Some of the more modern churches in Cappadoccia have been demolished and used for other buildings, like the Hotel I stayed in. Others have been converted to Mosques, but others like the one below stand empty. However, one Govenor in the region is encouraging Christians to use the church below and restore it. 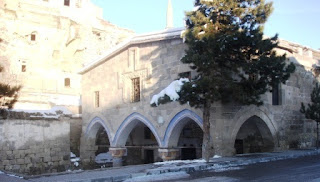