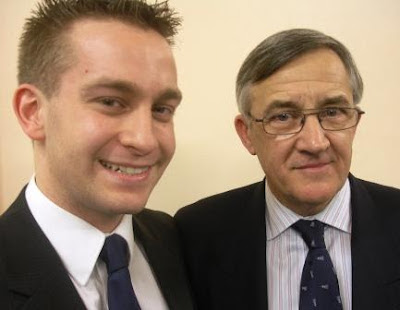 Today at our Conservative Association AGM Gareth Lyon was officially adopted as our candidate to fight Empress Ward. Gareth is going to be a great member of the team. He was educated at Oxford, has worked in Parliament as a researcher, speaks French and Turkish, works for a large local company and lives in the Ward.
Has he any bad qualities I hear you all asking - just the one. He's not as good looking as Cllr Parker and myself. Although, I grant he is better looking than the MP Gerald Howarth. All of which will not stop him being a first class councillor for Farnborough.
Gareth is keen to see progress on the Town Centre, more facilities for young people and is keen to get to work with us to make Empress a great place to live.

What issues would you like to see Gareth getting involved with?

What does Gareth think of the closure of The Tumbledown Dick pub?

For EHO reasons the place really did need to be sorted out but the concern is that what has been a rock/alternative pub for many years (many years of underinvestment I might add) is potentially going to be a "family friendly" pub.

We have plenty of trendy, mainstream and family-friendly pubs in the area and the Tumbledown has always been a great place for bands to play their first gig, for travelling tribute bands to pop in and entertain us and for bands like Hundred Reasons to launch themselves into the limelight.

Will we have another bland mainstream pub or one that has a few decent ales, a good menu AND rock music for the locals who have supported this place for so many years? (Nearly 20 years myself)

There is plenty of grassroots opinion that the pub needs to be revamped but not to lose its identity. Being so close to the Farnborough Road and with such a tiny beer garden lends the "family friendly" idea no credibility at all, so can we have a place for the peaceful alternative crowd to carry on their lifestyles please?

Spirit Group need to be aware of the passion people around here have for their local, just look at the petitions, the facebook group etc.

Hi Lever,
Thanks for the question. I have been to the Tumbledown a few times and agree that it did add an element of character to Farnborough and it sad to see it gone. I've taken part in the quiz a couple of times and have played the odd game of pool there so on a personal note I do hope we will see the return of something similar once environmental health concerns have been addressed.We certainly don't want to see Farnborough turned into just another characterless town.
Kind Regards,
Gareth Lyon
Conservative Party Candidate
Empress Ward, Rushmoor
2008

I think the Tumbledown Dick should be taken over by the council and turned into a safe and permanent music and arts venue catering for young people, local and upcoming bands etc. Aldershot has the West End Centre with council subsidy why shouldn't Farnborough?

It has been nearly a year now since the Tumbledown closed and it's sad to see an empty shell where there was once life, music and a thriving local scene.

Owners, The Spirit Group, I believe, have probably lost more money than they would had they made a small effort to address the EHO concerns and keep the pub open. That's not good business sense.

Rushmoor BC are doing nothing about keeping Farnborough's musical tradition alive whilst Camberley and Aldershot, neither within reasonable walking distance of Farnborough after a "good night out", thrive.

Whilst we now have the classy Aviator hotel and the now-upmarket Swan pub, are there plans afoot to turn The Tumbledown into a gastro tavern or just another trendy hi-street bar? I would bet any money that trying to emulate anything like Camberley's night life would just result in a huge increase of antisocial behaviour that you just didn't get with the Tumbledown regulars.

Let's have our music venue back, please? Serve better food, bring the bands back to Farnborough. Consider a Hard Rock Cafe style pub with a community spirit. Preserve something of our heritage because Farnborough's character is fast disappearing to modern "developments" that are the epitome of blandness.

Let's see some social responsibility and good business sense, a bold and wise decision not a middle-of-the-road "cop-out" in the revival of the Tumbledown, otherwise this town is going to end up being as unpopular as Bracknell or Slough. Give us a venue and a Farnborough with soul & character that we can be proud of not something the decision-makers will get flack for and regret.