This was held in St Christopher's Church and showed the plannned improvements to Cove by the County. Residents expressed their thoughts and we had a chance to discuss some ideas. These included more public art in the area, and reducing the pavement and road surface to the same level in the central area to reduce traffic speed and create more of a village feel. 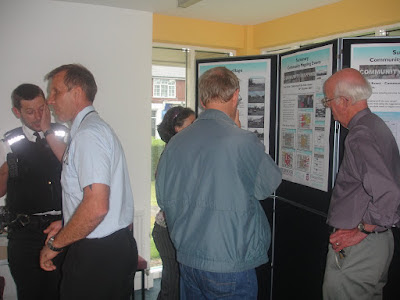 The picture above catches the moment at the exibition (note members of public on the right) John Trusler (Highway Officer - known by Councillors as the Highwayman) assaulted Empress beat officer Lee Jeffers after he had innocently observed how difficult it was to park in the area. Lucky WPC Bev Woodhead was not there - other wise he would have been in cuffs before you could say "restrictive parking measures".