Learning how to govern 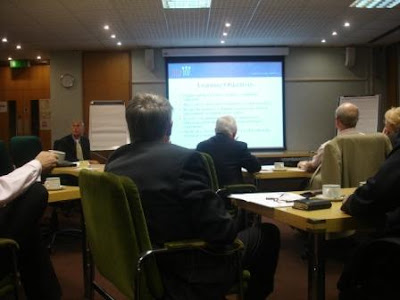 Rushmoor Councillors had a workshop on governance - local leadership and how best to develop and deliver it.
The irony?
The leadership of the Council were absent!
I am sure they had very good reasons.
This was not lost on the majority of members present, although it has to be recognised our Mayor was there - but as most of you know - he does not run the Council - he is our resident figurehead of State.
Lots of ideas were discussed and we can all feel good about this - I sadly dispair, however, that the powers absent will do very little to let go and push power out towards the people where I think some of the power needs to go. I would love to think I am wrong - and that we will do it before we are forced by legislation - we shall see.
For the benefit of the public and my entertainment I will try an identify the players at these meetings as follows, and breifly explain my reason:
So for this meeting we have:
The Good - have to be those that attended and especially those that made some good contributions and avoided political sniping.
The Bad - those that just could not be bothered to come along.
The Ugly - Mike Robert's (Labour Heron Wood). Not for his political sniping, or the fact he makes a comment on every topic - even I appreciate we did not get elected to keep quiet - but Mike does abuse it. No, he gets this nomination for the same awful jumper he insists on wearing to every meeting. This Christmas I must remember to de-jumper him and clean it or buy him a new one.

Well they certainly need it!

They do a very poor job of representing the community.

But when it comes to oversight and accountabilty, zilch!

When was the last time a councillor drew up a policy document?

All they do is rubber stamp what officials put before them, then collect their allowances.

Yes, get Roberts a jumper from the Sailor Boy charity shop. Maybe give him a wash and brush up too!

Who ran the workshop? Was it more brainwashing by the Andrew Lloyd and his useless officials?

If councillors need training, should they be there at all?

What we need is decison making pushed out to the local community, councillors merely enablers.

When will we have genuine community participation?

When will someone carry the can for losing two million of our money?

Good governance is non-existent in Rushmoor.

It is not good governance to lose two million pounds of taxpayers' money!

Good governance would involve local people, draw upon their experience. Instead we see arrogant contempt for the local community.

In Farnborough we have seen the town centre destroyed, many local businesses of long standing in the town driven out of businesses. The town centre was demolished a year ago. On the demolition site holes are dug holes filled in, diggers move around, piles of rubble move around, but no building work takes place. The site is also used to dump rubble from elsewhere. Last week two new piles of rubble appeared.

In Aldershot, the proposed development adjacent to Tesco would destroy what little is left of the town centre.

In Farnborough, an expanding businesses airport does nothing for the local economy, but does make life a misery for local residents.

Rushmoor should be working with local residents, not against.

Localisation, energy reduction, community participation, is a step in the right direction, but criticisms have been raised that the approach of transitions towns is too prescriptive.

Compulsory purchase of the derelict Farnborough town centre should be given serious consideration.

A programme aimed at installing solar heating, energy generation, insulation, should be implemented. No money should be allocated to housing associations unless they implement this programme. The programme would insulate local people from the vagaries of international energy markets and retain more money to circulate within the local economy.

Buying power of the Council should be used locally, ideally using the local currency. If need be the council issuing more notes which it underwrites from its reserves.

Project for a Participatory Society is part of an international project to encourage local participation and decision making.

- Project for a Participatory Society UK

At Rushmoor there is a very long way to go.