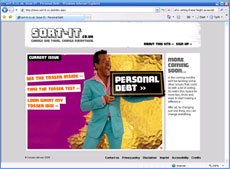 I want to let you know about the ‘sort-it’ campaign that has just been launched. This is a campaign about personal debt - which is growing by £1 million every four minutes. The Conservative Party have produced a film that will be distributed on the Internet to drive people to the website - the site also provides tools to help people take control of their finances.
This is about doing rather than just talking. The ‘sort-it’ campaign is not a political campaign. It’s about getting people to think about their own social responsibilities. We don’t believe that in opposition all you can do is talk about what you might do in Government. That’s why the Conservatives have championed the Young Adult Trust; that’s why Conservative candidates are creating their own local social action projects around the country - and that’s why we’ve launched the ‘sort-it’ campaign.
‘Sort-it’ is a website that will campaign on a wide range of issues. Its aim is to inspire people to take personal responsibility for making change happen, and it will provide tips and tools for people to do so - locally, nationally and sometimes internationally.
We really hope that this website will play a big part in helping people in this country tackle the serious problem of personal debt.
To see the site please go to http://www.sort-it.co.uk/