Dealing with the NHS 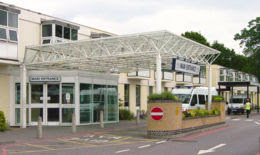 I am following a friend Simon thru his experience with the NHS. Last week Simon saw the doctor about a bladder issue. Local GP recommended a test. Simon got told to ring back for the result Friday which he did. He was told that there was a problem with the sample and further discussion would be needed with the GP who was busy - so he needed to call back on Monday for a telephone appointment Monday. Simon expressed dismay to the receptionist that he would now be left to worry all weekend about this, so the receptionist tried to find out more information unfortunately to little avail, so a telephone appointment for Monday was made.
Today Simon said that he rang the doctor as required. He needs to see a Urologist. The doctor left in reception for him two pieces of paper. One with a reference and one with a password, to use to make an appointment. Simon picked these up on the way home from work. Impressed at how efficient this all was Simon got straight onto the Internet to make his appointment. It was very impressive - he could choose 1 of 3 places - Frimley, Aldershot or Farnham. There was even a comparison page that awarded stars for the standard of service they had achieved. All were 3 star excellent. But with Frimley being closer he tried to book that one.

He tried to book the other locations.

He tried extending the calendar to 2009 for an appointment ...

No problem he said - I will use the other option - phoning a "real person". Which he proceeded to do. However, real person said that because he had gone on-line to book and was unable to book an appointment the computer had locked him out too. "You need to call back in 30 minutes" he was told politely.

Thirty minutes later Simon rang again. The "real person" tried to book, but he had a problem booking, so took Simon's details and informed him that they would advise Frimley Hospital, and someone from the hospital will ring and make an appointment with him within the next 2 weeks.

Simon rang me this evening and told me what happened, and I asked permission to log Simon's experience of the local NHS. So together we will see how Simon gets on. Good luck Simon.