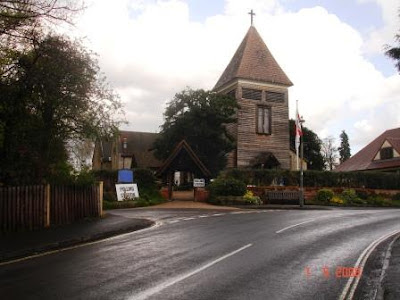 St Peter's Polling Station - Empress
We had a very good day yesterday in the Borough Elections, tinged with sadness at the loss of councillor Nigel Baines seat. Nigel was our Planning Chairman and a distinguished councillor who had served on the Cabinet and in a variety of positions - and a pillar of the local community in North Camp. I will miss him and wish him well. 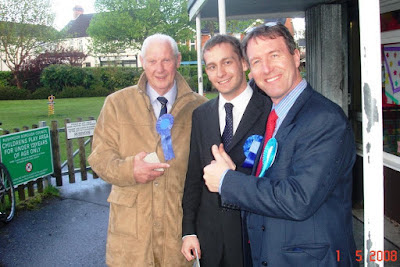 Despite this "freak" loss, Rushmoor Conservatives were otherwise euphoric. We took two Liberal seats very decisively in WestHeath and Cove and Southwood. And held onto the two targeted seats of St John's and Grange where we defended and returned three Conservatives including the Council Leader. 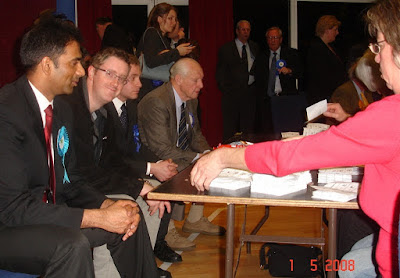 Watching the votes counted at the "Empress" table. Everyone looking worried ... except Chris who has obviously just had a pleasant thought, or is ahead of the others counting. Note: Leader and Deputy Leader in the background who have noticed that Cllr Parker has crossed the line (a white taped mark over which observers cannot pass)

Here in Empress we won again by a huge majority with Gareth getting more votes than anyone else in Rushmoor (1158 votes). More importantly, we gave vital aid and assistance to St John's, Grange, and WestHeath. So I am extremely proud of the work put in by the Empress Conservative Campaign Team, which included some new members that made a really valuable contribution especially Chris Griskell who has been an absolute star and is our new membership secretary.

For full results go to http://www.rushmoor.gov.uk/index.cfm?articleid=8098

The Council make up is now: