How to create an empty seat on a busy train 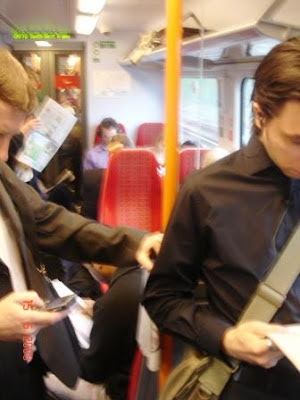 Women's Liberation has won the day - my proof is in the picture above. Thursday I caught the 8.45am from Farnborough to Waterloo for a Local Government Conference entitled "Power to the People"

In my carriage I found a seat as it was not full when I got on at Farnborough. However, the 12 seats in my carriage were inadequate for the 22 people that were in it by the time we left Brookwood Station. Looking up I saw a woman in her late 30's early 40's standing swaying from side to side reading a paper. Another two women were standing by the door, and two had already managed to find seats.

Terrible I thought - I must stand and offer this lady reading the paper and coughing a seat. I stood. "please take my seat" I said confident she would be grateful. To my horror, my offer was received with embarrassment "No thank you she quietly replied". "No, I insist" came my retort thinking that sometimes what women say is not what they really mean! This time her reply was more firm and clear - "No thank you, I prefer to stand thank you".

Well, now I was on my feet, I was determined my act of chivalry was not wasted. "Well I am not siting down while there are ladies standing" I announced to the carriage, who were all now desperate to avoid eye contact with the loony that had just got up from his seat. So very English I thought later was my announcement and their response.

The chilling fact was that none of the three women standing would take my seat. So I stood away from my seat, expecting one of the three to make a move. Not a chance. The seven men standing also chose to avoid the seat. So the seat was left empty, vacant, unemployed in a packed carriage all the way to Waterloo. And the seat and I not only averted the glance of the ladies of the carriage, but all the men too.

Power to the people? Often the seat of power looks very attractive, but when we get a chance to take it, like my train carriage, some would much rather someone else took it.