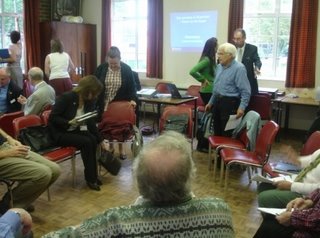 Today I wasted 2 hours of my life in a meeting organised by the County Council. Take a look at it. This is called consultation before you axe Bus services. I do not wish to defend or justify reduction or abolition of any Bus route, but this has to be one of the most useless meetings I have ever attended. Like many a resident waiting for a bus themselves I sat waiting for something useful to happen, or even get discussed, only to be as many residents must feel - disappointed.
After the initial introduction by County Council officers refering to "facing some tough decisions", "no more money from central Government" and "need to work closer with community transport" it was obvious the knife was out to cut services. However, it was dressed very neatly in democracy, we were told "there will be consultation and a review over the winter and early months of 2007" before the decision in April 2007. Great I thought - perfect timing - just before the elections.
Shame I thought to myself that we spent so much money on those awful Bus Lanes, they should have saved that waste of tax payers money and put it towards avoiding a cut in the services we have.
The only way to improve mass transportation is for central Government to plough huge amounts of money into it - it has to be cheap and frequent. People do not want to pay or wait. The car has spoilt us and it is no good trying to put the genie back in the bottle. I personally think we should be putting our resources into home working and flexitime so we simply reduce the rush hour conjestion which is where all the trouble is. Outside rush hour it is usually very pleasant driving outside the capital.
They are going to have another democratic "consultation" on the 30th November - why dont you go along when they get around to agreeing the venue and see if I am just getting cynical.