In the Chinese Year of the Pig - Hampshire has had a long association with the emblem of the pig. 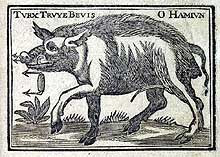 The mock heroic poem Hoglandia (or Hog-Land), written by Thomas Richards and first published in 1709, tells the story of a Hampshire laid waste by a rampaging wild boar.
A dreadful Boar, the Messenger of Heaven,
For spoil, for Havock, and Destruction's given.
High o'er his back a bristly Forest stands
Whose hostile Shafts a general Fear commands:
With Ivory Tusks his Jaws are thick beset,
Which foaming churn with Anger and Regret:
His Eyes with monstrous Flames of Vengeance glare,
He breathes a Cloud of Sulphur thro' the Air.

The illustration comes from a 1728 publication of the poem - Hampshire Record Office reference 169M84W/24. Luckily, the 'Hampshireites' were saved by one Bevis of Southampton, who used his skill and cunning to defeat the boar. There followed great rejoicing, and a feast with black pudding!