International Law means nothing to Iran 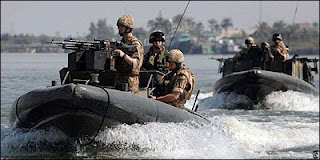 Why do we go through the pantomime of treating Iran as a proper sovereign state? Why the summonses of ambassadors, the arguments over territoriality, the insistence on maritime law?
Whether the Marines were in Iranian waters is irrelevant
These things mean nothing to the ayatollahs, as was clear from the very first act of their revolutionary junta in 1979, namely the taking hostage of US embassy personnel.
Think, for a moment, about what that act represented. The sanctity of embassies is the cornerstone of international relations. Even during the Second World War, when mutually antagonistic ideologies fought to obliterate each other, diplomats were peaceably evacuated through neutral countries.
When the mullahs seized the American legation, they were sending out a deliberate message: “We do not recognise your system. Your notions of territorial jurisdiction mean nothing to us.” They got away with it, too. In 1980, while the Americans were still being held prisoner, a counter-revolutionary group seized the Iranian embassy in London. We reacted by treating the ayatollahs as a friendly regime: we recovered their mission, sending our SAS men sliding down the walls like spiders on their threads, and handed it back to Teheran with a purse of money to cover the breakages.
Unsurprisingly, the mullahs concluded that they could have it both ways, being accorded all the courtesies of a sovereign state without having to reciprocate. So, naturally enough, they have carried on in the same vein: sponsoring militiamen in the Balkans, the Caucasus, the Silk Road khanates and across Araby; supplying rockets to their Lebanese proxy, Hezbollah; even bombing a Jewish community centre in Buenos Aires. Why Buenos Aires? What possible strategic interest do the mullahs have in Argentina? Perhaps its very remoteness was the attraction. By striking at the other side of the world, the ayatollahs were flaunting the fact that their power could cross oceans. Mark Steyn has argued that a refusal to acknowledge state sovereignty is the defining characteristic of the Teheran government. “If you dust off the 1933 Montevideo Convention on the Rights and Duties of States, Article One reads: ‘The state as a person of international law should possess the following qualifications: a) a permanent population; b) a defined territory; c) government; and d) capacity to enter into relations with the other states.’ Iran fails to meet qualification d, and has never accepted it.” Quite. The 1979 Iranian Revolution will one day be seen as an epochal event, on a par with the 1789 French Revolution and the 1917 Russian Revolution. Like them, it immediately spilled out from behind its borders, seeking to replicate itself around the world. Like them it refused to recognise the legitimacy of the old order, or respect the integrity of other states. That, ultimately, is why arguments about whether our Royal Marines were in Iranian waters are irrelevant. Teheran has demonstrated again and again that it couldn’t care less about such conventions. What else do the mullahs have to do before Britain realises what it is dealing with?