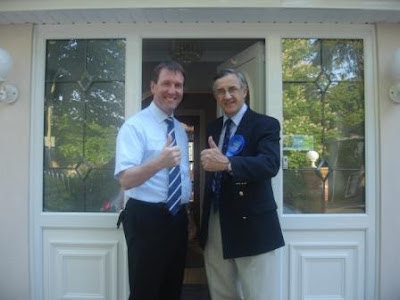 Following a hard fought campaign in Rushmoor this year, we took two more seats from the Liberal Democrats in Farnborough this year - Cove and Southwood, and Westheath Wards.

Here in Empress Ward we polled the highest votes in the Borough again. Our candidate Brian Parker was elected and will make a great member of the Empress Team working for our residents. The results were as follows:
Brian PARKER (Conservative) 1,150
Toby SMITH (Lib Dem) 480
Christopher WRIGHT (Labour) 169
Congratulations Cllr. PARKER.
And a big thank you to the residents of Empress for voting Conservative this year again. 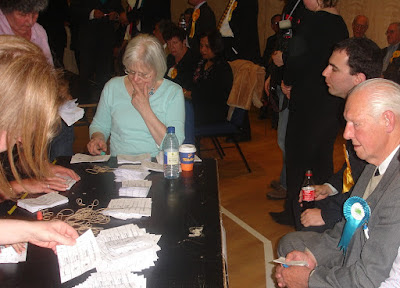 Brian Parker with fellow candidate Toby Smith at "the count" watching the officials counting the ballot papers. You can always spot the candidates at the count - they are the ones with the worried faces!!
I would also like to thank the other candidates for the dignified way they fought the campaign. I have said before, that I admire anyone that allows themselves to be put forward for public office.

Congratulations to all the ward team on this outstanding success.