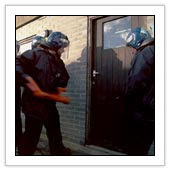 Early morning raids (6am) have been carried out in Farnborough as part of an operation to target perpetrators of anti-social behaviour and drug abuse.
Around 80 police officers, including officers from Rushmoor’s Safer Neighbourhood Teams, CID, the Force Support Unit and the force’s dog unit, executed a number of warrants simultaneously at addresses in Aldwick Close, Farnborough, Caswell Close, Farnborough and Bracklesham Close, Farnborough.
Officers have found evidence of Class A drug activity.
The warrants were part of an operation to target perpetrators of anti-social behaviour and drug abuse. Inspector Paul Pressley said: “Following the early morning raids, officers have seized numerous items which should enable us to apply for several Crack House Closure Orders. This evidence will be presented to a Magistrate who will decide whether or not they will grant a Crack House Closure Order under the Anti-Social Behaviour Act 2003. These orders mean that no-one can use the properties for three months.
“Drug abuse will not be tolerated in our community and we will deal robustly with those who commit these sorts of offences.
“This sort of behaviour can seriously affect the quality of life for many members of our community and can be detrimental to the lives of the other residents in the area. We will continue to work to make improvements to the community.
“I would urge anyone who witnesses any kind of drug related anti-social behaviour in their communities to contact the police.”
Local beat officers are visiting residents in the affected area to explain why the warrants were executed and offer community reassurance and crime prevention advice.
An 18-year-old man from Farnborough has been arrested on suspicion of possession with intent to supply Class C drugs. An 18-year-old man from Farnborough has been arrested on suspicion of being concerned in the supply of Class C drugs and money laundering.
A third person, wanted by Surrey Police, has also been arrested. Anyone with any information should contact Hampshire Constabulary on 0845 045 45 45 or Crimestoppers anonymously on 0800 555 111.